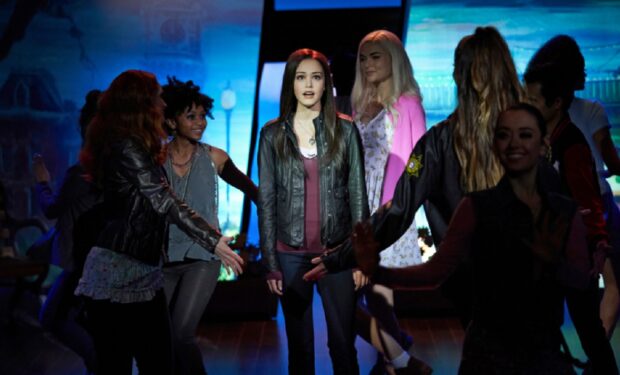 In the Legacies episode ‘Salvatore: The Musical!,’ the students prepare to put on a musical about the founding of the Salvatore School at the behest of their mysterious new guidance counselor. As Landon (Aria Shahghasemi) throws himself into writing the musical and Lizzie (Jenny Boyd), Josie (Kaylee Bryant), Kaleb (Chris Lee) and Jed (Ben Levin) dive into their roles, Hope (Danielle Rose Russell) distances herself from the musical.

In the video above, stars of the show including actress Jenny Boyd — who plays Lizzie on Legacies and plays the Vampire Diaries character Caroline Forbes Salvatore (Candice King‘s character) in the musical — talk about the “hilarious” Easter Eggs sprinkled throughout the musical and the entire episode for Vampire Diaries fans.

Aria Shahghasemi says the Legacies writer, Thomas Brandon, who wrote the entire musical is “an absolute psychopath of talent.”

Legacies airs Thursdays at 9 pm on CW, right after Walker at 8 pm.