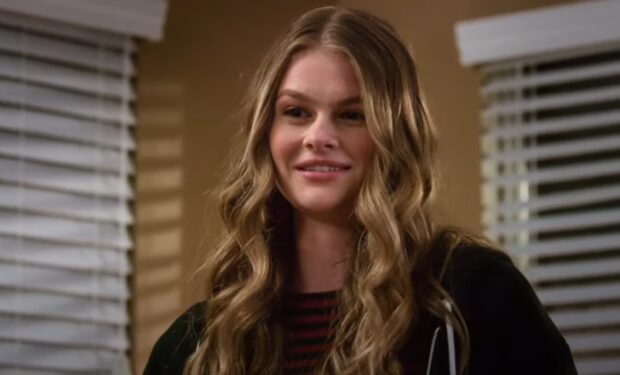 Dominique Booth in Dying to be a Cheerleader (Lifetime)

The protagonist of the Lifetime movie Dying To Be a Cheerleader (also known as Killer Cheerleader) is Darcy Daniels (Dominique Booth). After her mother dies, she moves in with her wealthy aunt Cassandra Tuxford (Ashlynn Yennie). When Darcy tries out for the high school cheerleading team (The Amazons!) and takes the one and only spot available, Darcy unwittingly humiliates the captain of the team Taylor Jennings (Kalen Bull).

Taylor doesn’t like Darcy because it appears Taylor’s boyfriend Brandon (Christian Rivera) has taken an interest in the new girl in school.

But it’s Amazon cheerleader April (Nicolette Langley) who Darcy she be more worried about!

When not on a movie set, Dominique Booth is flaunting gorgeous bikini pics online. As one friend replied to the pic above (with her sister Sofia, on the left): “This is dangerous for the internet.”

Dying To Be a Cheerleader premieres on Lifetime Movie Network (LMN) on Thursday, February 18 at 8 pm.