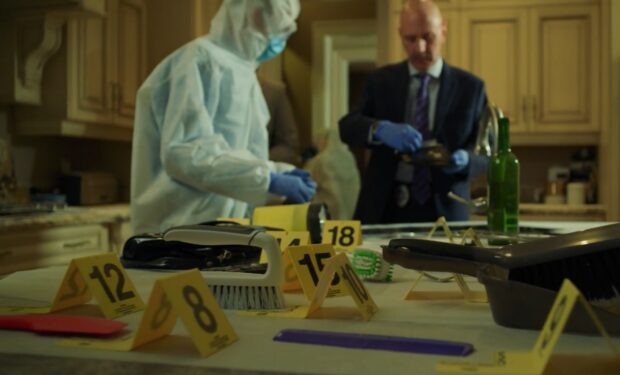 Re-enactment of police investigation on 'An Unexpected Killer' (Oxygen)

The documentary true crime series An Unexpected Killer investigates the 2010 murder of Diane Zaleski. The recently retired 54-year-old woman was found brutally murdered in her home in Union Township, New Jersey. She had been stabbed more than 44 times and strangled. Zaleski’s 91-year-old father was the one to find her body.

In 2014, the 28-year-old son of one of Zaleski’s neighbors, Arnell Yearwood, who pleaded guilty to the murder, was sentenced to 30 years in prison without parole. After he serves his term, Yearwood (who will turn 58 in 2044) is expected to be deported to his native Trinidad.

According to Union County Assistant Prosecutor Caroline Lawlor, after killing Zaleski, Yearwood stayed in her home where he did his laundry, watched pornography on her computer and sprayed a fire extinguisher around the house to cover his tracks.

An Unexpected Killer, which is execute produced by TV personality Kelly Ripa and her husband actor Mark Consuelos, airs Fridays at 8 pm on Oxygen.