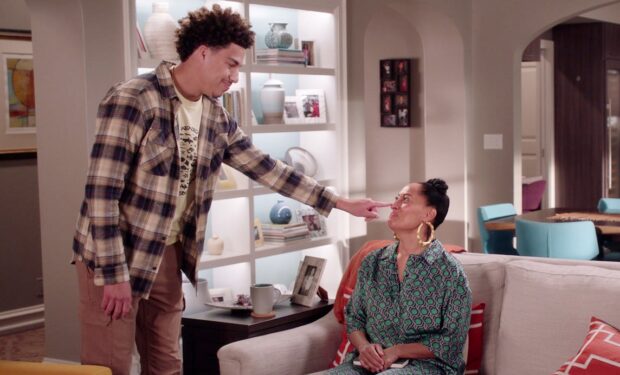 On the black-ish episode ‘The Mother and Child De-Union,’ Bow (Tracee Ellis Ross) and Junior (Marcus Scribner) take his girlfriend Olivia (Katlyn Nichol) and her mother, Maxine (Felice Heather Monteith), to brunch to celebrate Junior’s birthday. At the restaurant, while the kids step away from the table, Bow describes her relationship with Junior as “magical” but Maxine doesn’t see it that way. Maxine tells Bow it’s “creepy close.” Junior proves it in the sneak peek video below.

When Junior tries to feed his mother aka “my Queen” crab legs and asks that she open up the airplane hangar, Bow realizes the truth in Maxine’s assessment. Bow grins and says, “Hangar’s closed.”

black-ish airs Tuesdays at 9 pm on ABC, right after the celebrity TV game show To Tell the Truth hosted by Anthony Anderson at 8 pm, and right before the black-ish spin-off series mixed-ish at 9:30 pm.