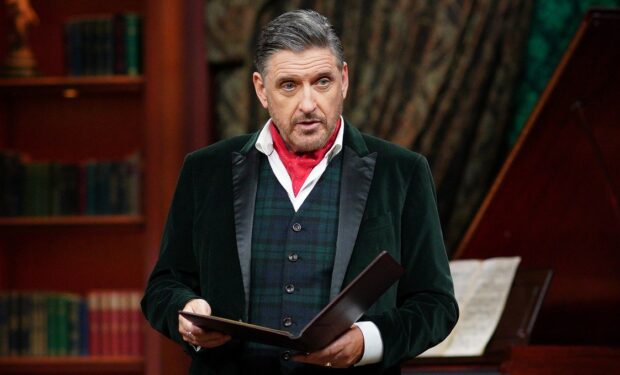 ABC is launching its clever new game show The Hustler, which challenges viewers at home to home their detective skills. The host, stand-up comedian and Emmy Award-winning TV host Craig Ferguson describes it as “a puzzle wrapped in an enigma that’s tattooed in mystery.” Wearing a dapper red ascot and Scottish plaid vest, Ferguson guides the five contestants as they collaborate to answer a series of trivia questions.

Here’s the catch: One of the five contestants (aka The Hustler) knows all the answers because all the questions are inspired by The Hustler’s real life and interests.

Craig Ferguson was born in Glasgow, Scotland. He moved to the United States in 1983 and got his big break as an actor on the TV series The Drew Carey Show. He played Drew’s boss Nigel Wick for eight years (1996-2004).

Craig landed his own talk show The Late Late Show with Craig Ferguson in 2005 — and it ran for nine seasons! He won a Peabody Award for the episode below, when he interviewed Archbishop Desmond Tutu.

Craig went on to host the game show Celebrity Name Game which was developed by Courteney Cox and David Arquette — and for which Craig won two Daytime Emmy Awards.

P.S. He’s still touring! Check out the video below.

A post shared by The Craig Ferguson Show (@craigyferg)

The Hustler airs Mondays at 10 pm on ABC, right after The Bachelorette which starts at 8 pm.