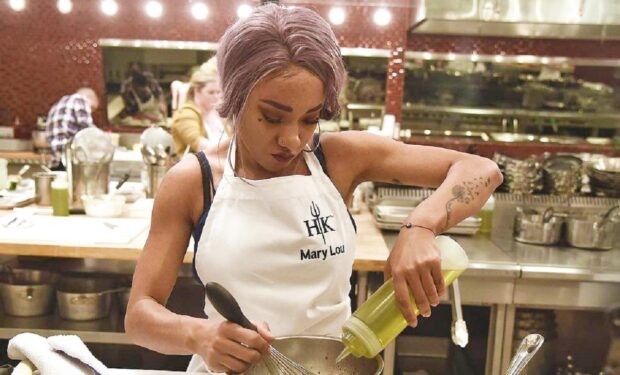 Mary Lou Davis aka Lou Beezy is one of the nine female chefs — there’s a total of 18 chefs — competing on Season 19 of Hell’s Kitchen. This year, the contestants sweat it out in Las Vegas, at celebrity chef Gordon Ramsay’s Hell’s Kitchen restaurant at Caesars Palace.

Mary Lou describes herself on social media as: “a loud ball of energy” who laughs at her own jokes. “And from time to time I do hoodrat shit with my friends. But, I also have 2 college degrees, I am the youngest chef in my company, i am the only female chef as well. I’m like no one you’ve ever met before, so do not put me in a box. Just enjoy the show.”

When not with Gordon Ramsay or on TV, Mary Lou likes to put on costumes as seen on her YouTube channel Geeks and Grubs. Check out her Black Panther video below.

Hell’s Kitchen airs Thursdays at 8 pm on FOX, right before Call Me Kat at 9 pm, and Last Man Standing at 9:30 pm.