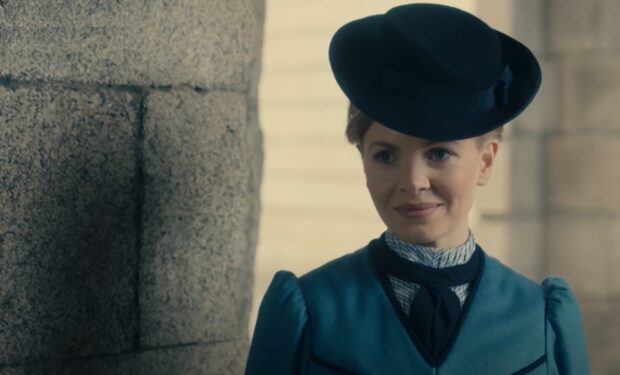 The protagonist of the PBS crime drama Miss Scarlet and the Duke is Eliza Scarlett. In the series premiere episode ‘Inheritance,’ she faces a stark future as her father dies suddenly and leaves her in debt. The daring young woman sees no other recourse but to take over her father’s private detective business. Keep in mind, this series is set in 19th century London — there are no female private detectives!

She needs to learn on the job so she sets her eyes on detective William Wellington aka the Duke (Stuart Martin) to show her the ropes.

Eliza is portrayed by Kate Phillips. She’s known for her roles on The English Game (Laura Lyttelton), Peaky Blinders (Linda Shelby), The Crown (Venetia Scott), War & Peace (Lise Bolkonskaya), and in the 2019 film Downton Abbey (Princess Mary), among others.

Get ready to see more of Kate: she is set to star in the forthcoming biopic Benediction about the English poet, writer and WWI soldier Siegfried Sassoon who is portrayed by Doctor Who star Peter Capaldi.

Miss Scarlet and the Duke airs Sundays at 8 pm on PBS, right before All Creatures Great and Small at 9 pm.