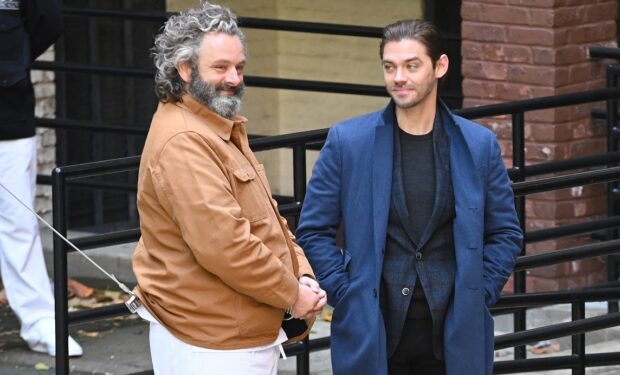 In the Prodigal Son episode ‘Speak of the Devil,’ when a priest is found murdered in his church, Malcolm Bright (Tom Payne) grapples with its effect on his own trauma. He promises to unveil the truth while his institutionalized father Martin (Michael Sheen) has a chat with his fellow inmate in the psych ward, Friar Pete (guest star Christian Borle), who’s killing spree got him kicked out of the monastery.

Christian Borle is known for his roles on TV shows including The Good Wife (Carter Schmidt), Masters of Sex with Michael Sheen (Frank Masters), Smash (Tom Levitt, see photo above), and in films including The Bounty Hunter with Jennifer Aniston and Gerald Butler (Caddy), among others.

On stage, Borle has won two Tony Awards for his roles in ‘Peter and the Starcatcher’ in 2012 and in ‘Something Rotten!’ in 2015. He also starred in ‘Charlie and the Chocolate Factory’ as Wonka (see below).