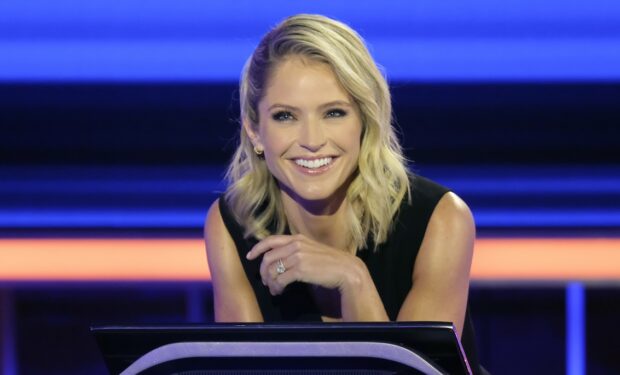 ABC is launching its new game show The Chase where three competitors must “pit their wits and face off against the Chase, a ruthless quiz genius determined to stop them from winning cash prizes.” The host of The Chase is Sara Haines.

After graduating from Smith College (class of 2002), the Iowa native Sara Haines launched her TV broadcasting career in the NBC Page Program. The program was satirized on 30 Rock via NBC page character Kenneth, but in real life, notable people including Regis Philbin, Michael Eisner, Ted Koppel and Aubrey Plaza, launched their super successful careers as NBC pages, too.

Sara worked herself up the ladder at 30 Rock and in 2009 became a contributing correspondent on Today. Since then she’s worked as a correspondent on Good Morning America, The View, and GMA Day which was later named Strahan and Sara (with ex-NFL star Michael Strahan).

She lives in Williamsburg, Brooklyn with her husband (a lawyer) and their three children: a 4-year-old son, 3-year-old daughter, and a 20-month-old son.

The Chase airs Thursdays at 9 pm on ABC, right after Celebrity Wheel of Fortune at 8 pm.