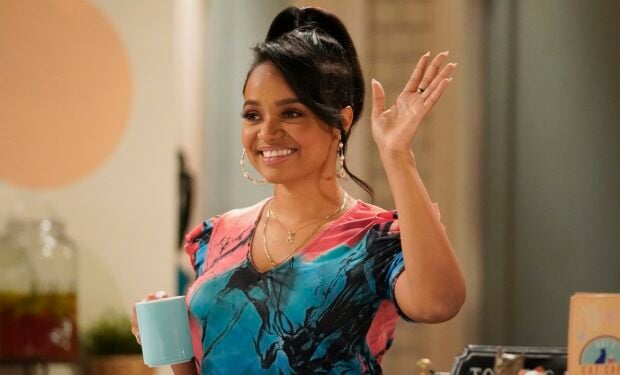 The Big Bang Theory star Mayim Bialik stars in the new FOX sitcom Call Me Kat, which is executive produced by Bialik and her former BBT co-star Jim Parsons. Mayim plays the protagonist, Kat, who decides to spend the money her parents saved for her wedding on a cat café, in Louisville, Kentucky. Yes, a Southern café where patrons can bring their cats. Waitress/barista Randi is portrayed Kyla Pratt.

Kyla Pratt is known for her roles on One on One (Breanna Barnes) and in the Dr. Dolittle movies with Eddie Murphy (she’s plays Doolittle/Murphy’s daughter Maya), among others. She most recently starred in the Lifetime holiday movie No Time Like Christmas.

In real life, Kyla is in a relationship with tattoo artist Danny Kirkpatrick (father of her two kids) and appeared with Danny on an episode of the reality TV series Black Ink Crew Compton.

Call Me Kat airs Thursdays at 9 pm on FOX, right after Hell’s Kitchen with celeb chef Gordon Ramsay at 8 pm, and right before Last Man Standing with Tim Allen at 9:30 pm.