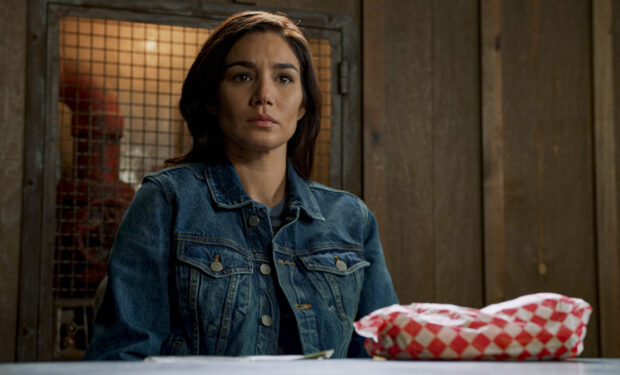 In the NCIS: Los Angeles episode ‘Love Kills,’ when NCIS agents Callen (Chris O’Donnell) and Hanna (LL Cool J) investigate the murder of a man about to reveal the source of a massive counterfeiting operation, their prime suspect is an old acquaintance, a woman named Pietra Rey.

She tried to kill Callen and Hanna by blowing them up, twice. And her last interaction with Kensi (Daniela Ruah) was a rough one, as seen in the 2017 NCIS: Los Angeles episode ‘Forasteira.’

Pietra Rey is portrayed by Mariela Garriga. The Cuban-born actress is known for her roles in horror films including Bloodline (Lauren) and TV series including Nightmare Cinema with Mickey Rourke (Sister Patricia, photo above) and Horror Vacui (Anna), among others. Fun fact: Mariela made her acting debut on the big screen in the 2011 film Matrimonio a Parigi (translated Wedding in Paris) as a French burlesque dancer.

When not on TV or movie set, Mariela enjoys the great outdoors and sometimes in a string bikini as seen in the gorgeous photo above.