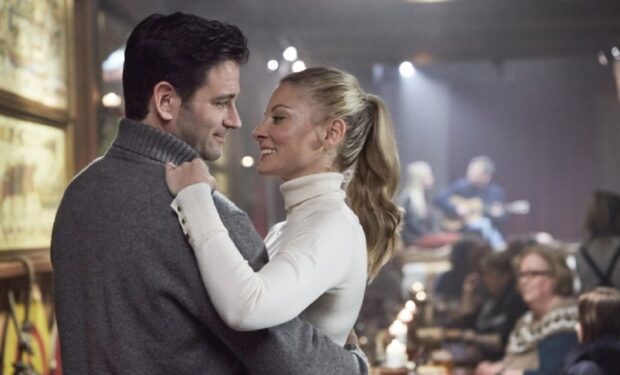 Donnell and Doubleday in 'Love on Iceland' (Hallmark/Crown Media)

In the beginning of the Hallmark Channel movie Love on Iceland, overworked Chicago podcaster Chloe needs a break the Windy City. Her best friend Isabella (Patti Murin) suggests that they — and a handful of friends from their college days — visit the country of Iceland. Looking for inspiration on Iceland, Chloe actually finds love (again) with her ex-boyfriend (Colin Donnell) who joins the group trip even though he’s uninvited.

Chloe is portrayed by Kaitlin Doubleday.

The L.A. native is known for her roles on Nashville (Jessie Caine), Empire (Andre Lyon’s wife Rhonda), and Hung (Logan Louis), among others.

Fun fact: Kaitlin made her big screen debut in the 2002 Steven Spielberg film Catch Me If You Can as Joanna opposite Leo DiCaprio.

Love on Iceland airs again on Hallmark Channel on Sunday, January 17 at 8 pm.