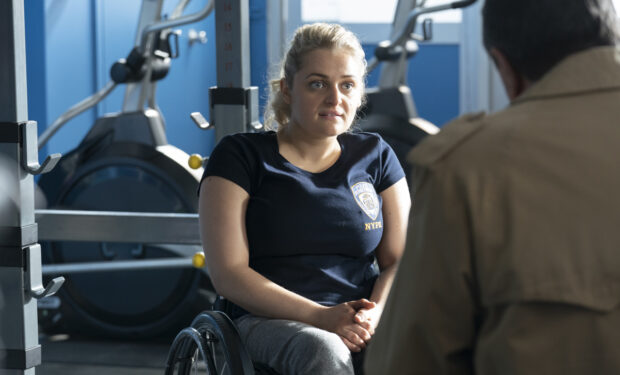 In the Blue Bloods episode ‘Redemption,’ while NYPD Detective Danny Reagan (Donnie Wahlberg) and his partner Baez (Marisa Ramirez) pursue a rideshare rapist, NYPD Commissioner Frank Reagan (Tom Selleck) has to decide whether the department can accommodate a request to remain in the field from Detective Allison Mulaney, a lauded police officer who is wheelchair-bound after being wounded in the line of duty.

Detective Allison Mulaney is portrayed by Broadway star, Tony Award winner Ali Stroker. She won the 2019 Tony Award for her role as Ado Annie Carnes in Oklahoma), making her the first actress who uses a wheelchair for mobility to appear on a Broadway stage, and to be nominated for and win a Tony Award.

Ali is paralyzed from the chest down. She has been in a wheelchair since she was 2, after surviving a car accident with her mother and brother.

The 33-year-old Jersey Girl is also known for her TV roles on Lethal Weapon (Nina), Instinct (Ella), and MTV’s Faking It (Wendy), among others. She made her big TV debut in a 2013 episode of Glee as Betty Pillsbury.