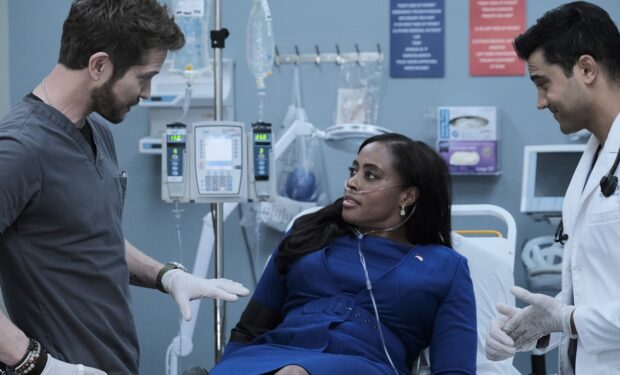 In The Resident episode ‘Mina’s Kangaroo Court,’ while Cain’s (Morris Chestnut) elective surgery patient returns with complications, Conrad (Matt Czuchry) and Devon (Manish Dayal) treat a local Congresswoman who withholds information that could prevent her from receiving proper treatment. The Congresswoman is portrayed by Nichelle Hines.

As an actress, Nichelle is known for guest star roles on NCIS (Special Agent Norman Hench), The King of Queens (April), Everybody Hates Chris (Mrs. Dumas), and The Sopranos (Felicia), among others.

When not on a TV set, Nichelle spends time at her gym Cycle House, an indoor cycling gym she founded and where she and her brother Aaron give spin classes.

Together the handsome siblings appeared on the E! reality series Hollywood Cycle.

The Resident airs Tuesdays at 8 pm on FOX, right before Prodigal Son at 9 pm.