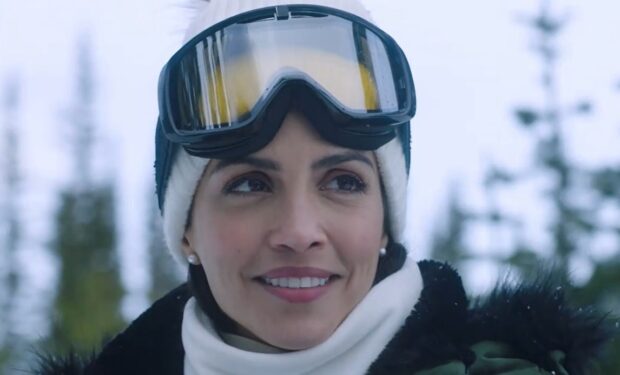 The protagonist of the new Hallmark Channel movie A Winter Getaway is professional concierge Courtney (Nazneen Contractor). She works for a very high-end concierge travel agency that makes extravagant vacation/holiday dreams come true. As they jet set to a mountainside resort, sparks fly between her and new client Joe Franklin (Brooks Darnell).

Joe is really just an “average guy” who’s been gifted the luxury trip, but Courtney doesn’t know that.

After being mistaken as a millionaire, Joe has to break the news to Courtney and worries that she might not feel the same way about him after she learns the truth.

Nazneen will appear next on the big screen in the crime mystery movie Spiral with Chris Rock and Samuel J. Jackson (expected to be released in May 2021).

A Winter Getaway premieres on Hallmark Channel on Saturday, January 23 at 9 pm. [So many Hallmark movies, streaming here.]