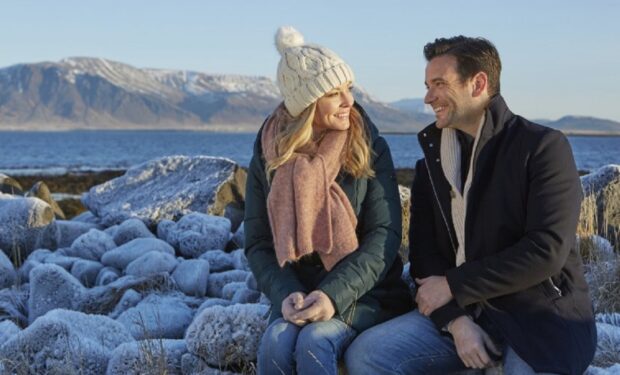 Doubleday and Donnell in 'Love on Iceland' (Hallmark Channel/Crown Media)

The protagonist of the Hallmark Movie Love on Iceland is workaholic podcaster Chloe (Kaitlin Doubleday, Empire, Nashville). When she decides it’s time for a vacation, her best friend Isabella (Patti Murin) suggests traveling to Iceland and with a group of old college friends. When Chloe’s ex-boyfriend, travel photographer Charlie (Colin Donnell) shows up uninvited, sparks fly.

Love on Iceland was filmed in Iceland – a first for the Hallmark Channel. And yes those ice caves are real.

Fun insider fact: as Isabella, actress Patti Murin says being in the ice caves makes her feel like she’s in a Disney movie which is funny since she played Anna in Disney’s Broadway musical Frozen.

A post shared by Ice Cave In Iceland (@icecaveiniceland)

Love on Iceland will air again on Hallmark Channel on Sunday, January 17 at 8 pm.