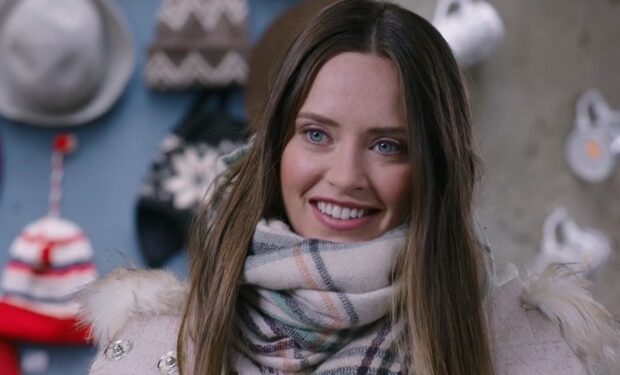 Merritt Patterson in A Royal Winter on Hallmark Channel/Crown Media

The protagonist of the Hallmark Channel movie A Royal Winter (Merritt Patterson) is an American woman named Maggie. While considering a career move, she travels to Europe with a friend. While abroad, she meets a handsome local named Adrian (Jack Donnelly) who turns out to be a prince about to be crowned King. Adrian’s mother isn’t pleased about the romance, at first.

A Royal Winter was filmed in Bucharest, Romania, including at the historic 12th Century centre of Sighisoara, which is an inhabited medieval citadel.

In 1999, the walled old town was designated a UNESCO World Heritage Site for its 850-year-old testament to the history and culture of the Transylvanian Saxons.

Note: In the beginning of A Royal Winter, English-accented Adrian reveals a local ancient “Calpurnian” custom to Maggie on a small street in town, although Calpurnia was Roman — she was Julius Caesar‘s last wife, when he was assassinated in 44 B.C.

A Royal Winter is airing again on Hallmark Channel on Wednesday, January 6 at 8 pm.