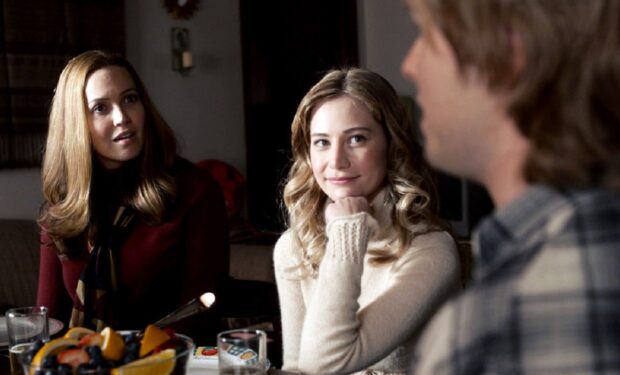 l-r: Mandy Moore, Amanda Leighton, Logan Shroyer, THIS IS US (Photo by: NBC)

In the This Is Us Season 5 episode ‘A Long Road Home,’ Randall (Sterling K. Brown) hears from someone who claims to have known his mother while Kevin (Justin Hartley) debates the best path for his future. The episode includes a flashback at the Pearson’s kitchen table. As seen in the photo above, young teenage Sophie (Amanda Leighton) looks adoringly at young teenage Kevin (Logan Shroyer).

When not filming This Is Us or Trolls on TV (she’s the voice of Poppy!), the 27-year-old petite Amanda Leighton (5’2″) spends time with her tall (6-foot, 185 lb.) and totally ripped boyfriend, professional martial artist Sage Northcutt aka Super Sage.

Before competing in the featherweight division of ONE Championship, Sage competed for the UFC. Northcutt, who is now 24, was inducted into the Black Belt Magazine Hall of Fame in 2012 at age 15.

The handsome and talented couple got engaged in September 2020!

This Is Us airs Tuesdays at 9 pm on NBC, right after Zoey’s Extraordinary Playlist at 8 pm.