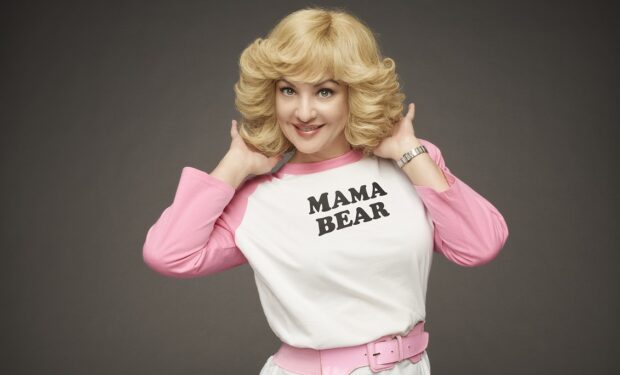 On The Goldbergs episode ‘Bevy’s Big Murder Mystery Party,’ inspired by his movie obsession, Adam (Sean Giambrone) helps his mother Beverly (Wendi McLendon-Covey) plan a murder mystery party for the family. Based on the featured photo below, it appears to be a hit!

When not in character and wearing her 1980s garb and feathered blond hair, actress Wendi McLendon-Covey is flaunting her gorgeous modern woman presence on the cover of magazines including the new issue of CVLUX — see photo below.

The 51-year-old comedic actress is told by fans that she looks “so young” another says 20 years younger, while fellow sitcom legend Patricia Heaton (Everyone Loves Raymond) left the apt reply: “Wowza!”

The Goldbergs airs Wednesdays at 8 pm on ABC, right before American Housewife at 8:30 pm, The Conners at 9 pm and Call Your Mother at 9:30 pm.