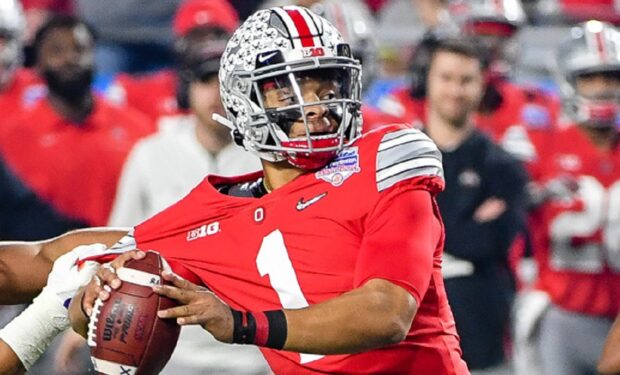 When Ohio State’s quarterback Justin Fields shared the photo below of the football team’s advance to the National Championship, he captioned it “Started the Year Off the Right Way. Blessed.”

When his teammate Teradja Mitchell saw the post, he left a witty reply. The 6’2”, 240 lbs. inside linebacker from Virginia Beach, Virginia wrote: “Best QB in the country!! Go argue with ya mama if you think otherwise.”

Other teammates chimed in with celebratory compliments including “Lit!” and “Woot” and NFL linebacker Davin Bellamy (who played college football at Georgia with Fields before Fields transferred to OSU) is comparing him to the NFL’s New England Patriots quarterback Cam Newton, when he replied: “Young CAM!!!!” Justin is 21, Cam Newton is 31.

The Alabama (12-0) vs. Ohio State (7-0) College Football Playoff National Championship game will be played at Hard Rock Stadium in Miami on Monday, January 11 at 8:15 on ESPN.