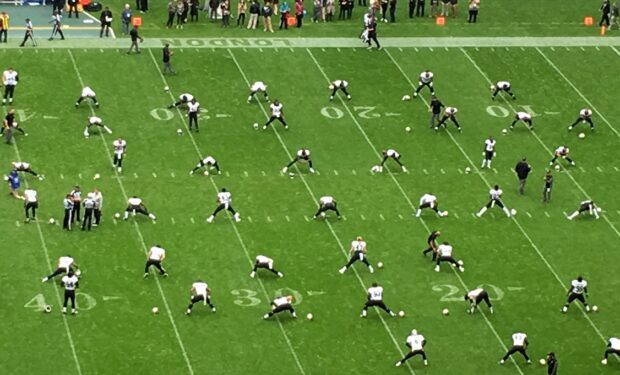 New Orleans Saints warming up before the game vs. the Miami Dolphins in London in 2017, photo: Ian Hughes, CC BY 2.0, via Wikimedia Commons

NFL Super Bowl champions, legendary quarterbacks Tom Brady (Tampa Bay Buccaneers) and Drew Brees (New Orleans Saints) face each other next at the NFC championship game at the Mercedes-Benz Superdome. All eyes are on former Patriots QB Brady as he reaches for his 14th conference championship.

But Brees and the rest of the Saints have the good fortune of welcoming defensive end Trey Hendrickson back in time for the big game.

Keep in mind: in the Week 9 game against the Bucs, Henderickson recorded two sacks on Brady during the 38-3 win.

When not on the field, Hendrickson spends time with his bride, Alisa nee Chernomashentsev Henderickson, whom he married on the beach in July 2020. Alisa is getting her Master’s degree in healthcare informatics and will graduate in 2023, which will make her a Doctor of Pharmacy.

Before studying pharmacy, Alisa trained as a figure skater for 11 years (see below) and was on the Air Force Academy fencing team!

The 6’4”, 270 lbs. Hendrickson played college football at Florida Atlantic before he was selected by the Saints in the 2017 NFL Draft. He signed a four-year, $3.17 million contract.

The Buccaneers vs Saints game will broadcast live on Sunday, January 17 at 6:30 pm on FOX.