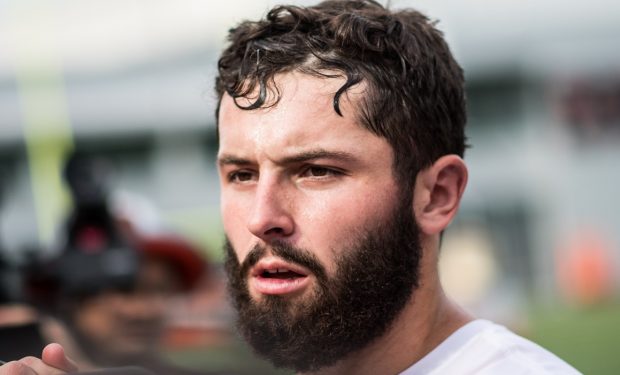 NFL football star Baker Mayfield, quarterback for the Cleveland Browns, has a lot going for him. After playing college football at Texas Tech and Oklahoma, and winning the 2017 Heisman Trophy, he was drafted by the Browns first overall in the 2018 NFL Draft.

In 2020, Mayfield led the Browns to their first playoff run since 2002, and their first winning season since 2007 – the Browns finished the regular season 11-5. Oh, and he married a woman (Emily) who looks amazing in a bikini (see below).

But remember, Baker Mayfield is still just 25 years old and like many millennials, he waxes nostalgia for iconic and ironic TV shows he grew up watching including HBO’s Entourage. The show is about emerging star actor Vince (Adrian Grenier) who — with his entourage of friends from New York — adjusts to Hollywood with the help of his take-charge agent Ari (Jeremy Piven).

When Jeremy Niven shared the photo above of him with three of his Entourage co-stars, he reported that they talked about a lot stuff including an Entourage reboot, and asked fans for their thoughts. That’s when Mayfield threw in his two cents and replied: “love to see it.” Keep in mind his a pretty good thrower!

The Cleveland Browns face the Kansas City Chiefs at the NFL AFC Divisional Round game on Sunday, January 17 at 3:05 pm on CBS.