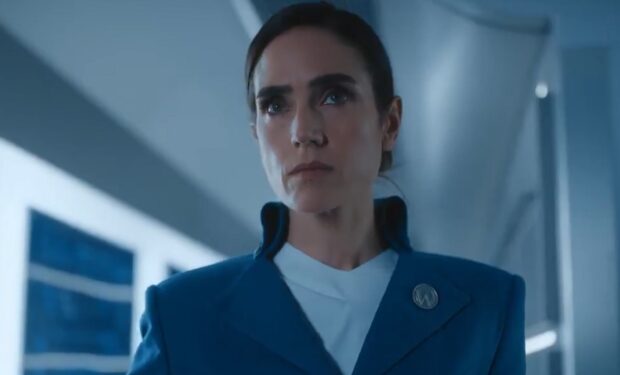 In the Season 2 premiere of the sci-fi drama Snowpiercer, ‘The Time of Two Engines,’ Mr. Wilford (Sean Bean) has arrived. “I’m back and I’ve come to take what’s mind,” he says. And as this new threat rattles Snowpiercer (a population of people trying to survive on a fast-moving train) to its core, Melanie (Oscar winner Jennifer Connelly, A Beautiful Mind) makes a move that can’t be undone.

When not filming Snowpiercer, the gorgeous and talented Jennifer Connelly, who just turned 50, is promoting her next big screen project, Top Gun: Maverick. The long-awaited sequel to the 1986 classic Navy aviation drama Top Gun starring Tom Cruise and Val Kilmer, who reprise their roles as Maverick and Iceman, is expected to be released on July 2, 2021.

In a remote interview with Entertainment Tonight (see below), when the interviewer asked Jennifer, “Tom Cruise keeps everything under wraps doesn’t he?”, she agreed and said with a slight smile, “He’s pretty good at that.”