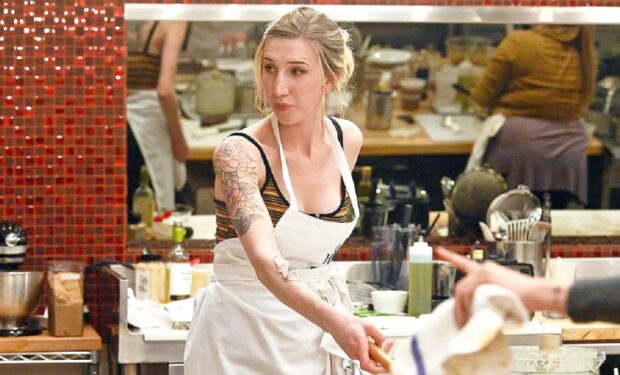 There are a number of fascinating aspiring chefs competing on Season 19 of Hell’s Kitchen at Gordon Ramsay’s Las Vegas restaurant at Caesars Palace. There’s mohawk chef Jordan Savelle and pink-haired Mary Lou Davis, to name two. Tall blond Nikki Hanna is another one of the nine talented female chefs sweating it out in Ramsay’s kitchen.

When the New Hampshire native Nikki Hanna posted the photo above of her “perfectly defined pan handle burn” many of her fans thought it was “a sick new tattoo.” (Nikki has a number of tattoos which are visible on the show. Another wrote: “I’d go get that inked.”

After filming Hell’s Kitchen, Nikki has been planning to roll out a line of women’s chef wear (like the stretchy chef jacket featured below) under the label Yellow Jacket.

Hell’s Kitchen airs Thursdays at 8 pm on FOX, right before the new sitcom Call Me Kat at 9 pm.