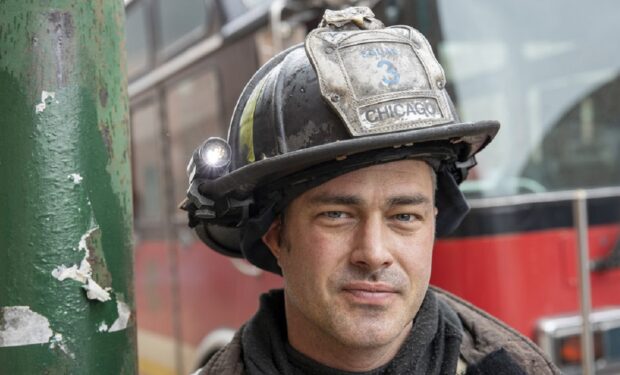 Actor Taylor Kinney is back on Season 9 of Chicago Fire. In the episode ‘Smash Therapy,’ while a mishap on the aerial ladder in the midst of a fire rescue leaves Mouch shaken and questioning his abilities, Kidd (Miranda Rae Mayo) looks for support from Severide (Taylor Kinney).

As fans can tell by the featured photo above, Taylor Kinney appears as handsome as ever. Although his close to 1 million followers on Instagram miss him. He hasn’t posted since November.

When Taylor posted the shirtless, bandaged and bruised photo of himself in November (above) with the mysterious caption “I WON THE THING,” more than one fan voiced their concern.

Rumer, the 32-year-old former winner of Season 20 of Dancing with the Stars, replied to the photo with a series of Flushed Face emojis.

Maybe Rumer could teach Taylor some new dance moves! (Check out the video of Kinney dancing with a sexy brunette above.)