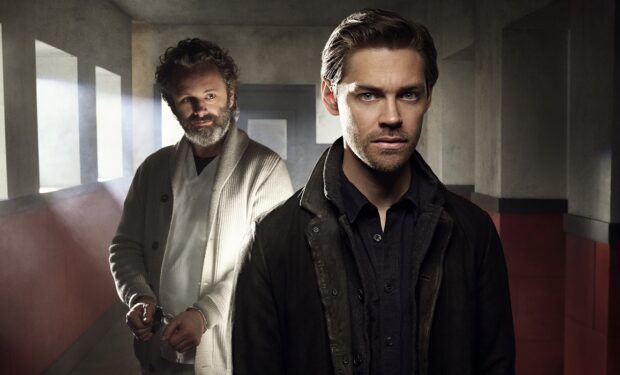 In the Prodigal Son episode ‘Speak of the Devil,’ while Bright (Tom Payne) investigates the murder of a priest in his own church, his shackled serial killer father Martin (Michael Sheen) tries to help from the inside. Martin taps into the mind of fellow inmate Friar Pete (Broadway star Christian Borle), whose killing spree got him kicked out of the monastery.

Prior to her debut on Prodigal Son, the gorgeous 51-year-old Oscar winner Catherine Zeta-Jones (Chicago) flaunted the bikini pic above with the caption: “Last year in Bermuda I was caught shamelessly kissing Santa Claus in my bikini, 😂 totally bummed that this year he didn’t show up. I was ready, masked and waiting. Oh well, maybe next year.”

Don’t worry, she got to kiss her husband of 20 years, two-time Oscar winner Michael Douglas (Wall Street, One Flew Over the Cuckoo’s Nest) instead!