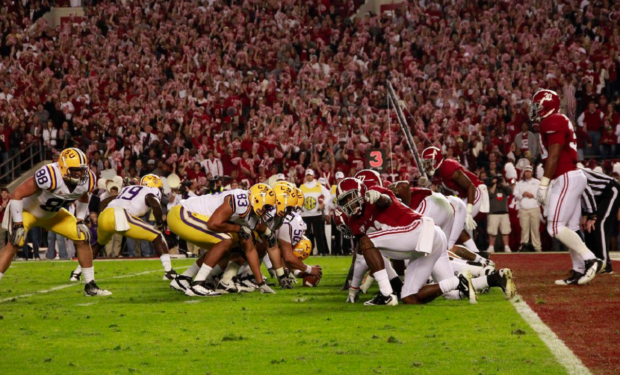 DeVonta Smith is the 22-year-old wide receiver playing college football for the Alabama Crimson Tide — and the winner of the 2020 Heisman Trophy. He helped the Crimson Tide post their undefeated season record (12-0) and advance to the Playoff National Championship game in Miami.

The 6’1”, 175 lb. football player celebrated the New Year looking dapper in an extremely well-fit suit, as seen in the photo above. He captioned it: “I come from a different type of cloth we don’t gossip!”

The post received more than 75,000 likes including one from Alabama alum, 6’2″, 242 lb. NFL tight end Irvin Smith Jr. (now of the Minnesota Vikings) who replied: “The slimiest” with a heart emoji.

The Alabama (12-0) vs. Ohio State (7-0) College Football Playoff National Championship game will be played at Hard Rock Stadium in Miami on Monday, January 11 at 8:15 on ESPN.