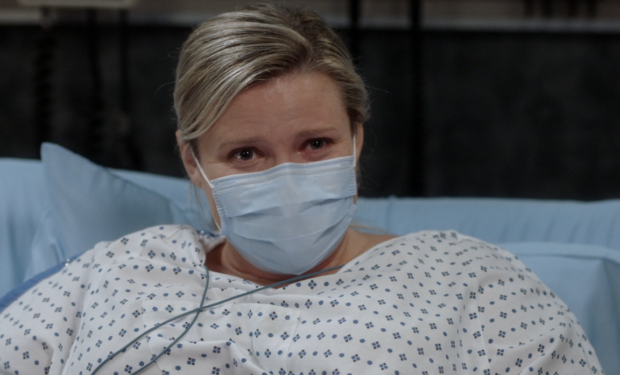 In the Grey’s Anatomy episode ‘Fight the Power,’ while Bailey (Chandra Wilson) panics as she hears there has been a surge of COVID-19 cases, and Jackson (Jesse Williams) and Richard (James Pickens Jr.) team up against Catherine (Debbie Allen) to teach her a lesson, Carina (Stefania Spampinato) checks in with her patient Val Ashton (Mackenzie Marsh).

In the previous episode ‘My Happy Ending‘ a recently divorced Val came to the hospital with abdominal pain no knowing that she was pregnant. It turned out that a fetus was growing near her liver. After Carina performed an emergency C-section, Val named her 26-week-old daughter Luna who was intubated and then taken to the NICU.

Actress Mackenzie Marsh is known for her roles on Charmed (Knansie), Will & Grace (Vince’s cousin and Drew’s ex-wife Angela), The Following (Tilda), and the 2016 movie Pee-wee’s Big Holiday (Judy Brown), among others.

Grey’s Anatomy airs Thursdays at 9 pm on ABC, right after Station 19 at 8 pm.