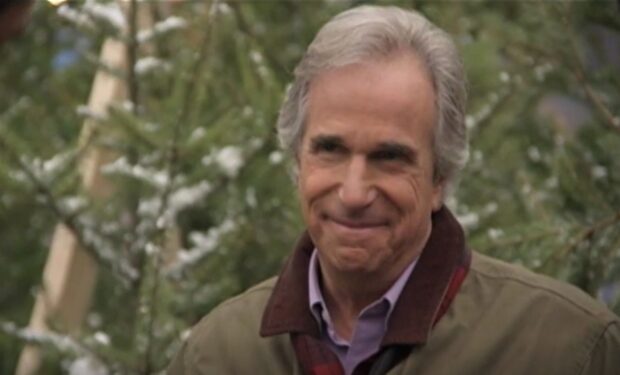 The protagonist of the movie The Most Wonderful Time of the Year is corporate analyst, disenchanted single mom Jennifer Cullen (Brooke Burns). When her Uncle Ralph (Henry Winkler) comes to her home for the holidays, he brings a handsome chef (Warren Christie) whom he met on the plane. Jennifer is dating a very successful man named Richard but Uncle Ralph doesn’t approve of any man who wears $800 shoes.

Ralph wants his niece, who’s more like a daughter, to dump her fancy boyfriend for the chef.

Henry Winkler is best known for his iconic TV role as the Fonz on Happy Days.

Since then he’s appeared on several TV shows over the years including Barry, Parks and Recreation, Royal Pains, and Arrested Development, among others.

Most Wonderful Time of the Year is airing on Hallmark Channel on Monday, December 14 at 8 pm.