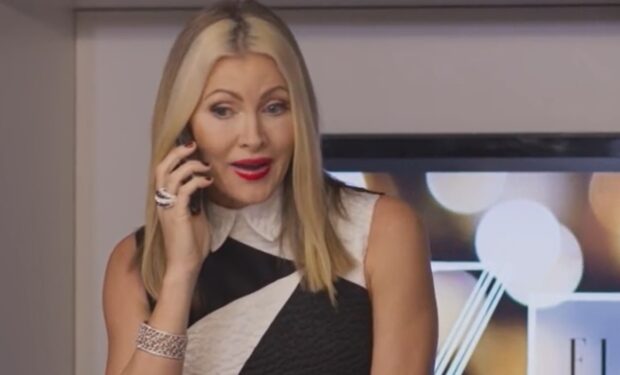 Caprice Bourret in 'Christmas at the Castle' (Lifetime/Reel One)

In the Lifetime holiday movie Christmas at the Castle (also known as Christmas in the Highlands), New York City perfume executive Blaire Henderson (Brooke Burfitt) is sent by her demanding boss Mrs. Ferdi to Scotland. Mrs. Ferdi wants Blaire to find and buy the rare fragrance The Heart of the Highlands, and before Christmas!

As a model, Caprice has appeared on the cover of hundreds of magazines including the Sports Illustrated Swimsuit Issue (1998). She was named GQ‘s Woman of the Year, and Maxim’s International Woman of the Year in three consecutive years. The leggy blond is also well known for her sexy swimsuit calendars.

And the forty-something model/actress continues to flaunt string bikini pics as seen above and below.

As an actress, Caprice is recognized for her roles in the 2017 TV movie Sharknado 5: Global Swarming (Polaris), and on the 1999 TV series The Dream Team (Dani West), among others.

Or maybe you recognize her from the reality TV shows Ladies of London (in 2014) or Dancing on Ice (Season 12) or Celebs on the Farm.

Christmas at the Castle premieres on Lifetime on Wednesday, December 23 at 8 pm.