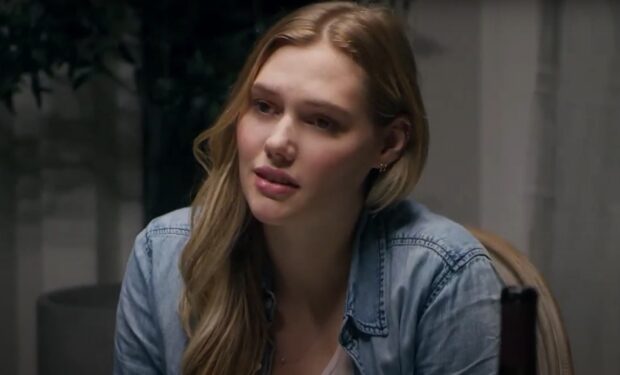 The protagonist in the Lifetime movie Cheer Squad Secrets is mom Kelly Regan (Margaret Anne Florence). After helping her daughter Amelie (Karis Cameron) become captain of the high school cheerleading squad (Go Bobcats!) she discovers that someone – her uber competitive coach! – has been giving her daughter steroids. When Coach Lena (Anita Brown) is caught and suspended, she seeks revenge for losing the cheerleading championship.

This is Karis Cameron’s second cheerleader role: she played Heather in the 2019 TV movie Identity Theft of a Cheerleader. While Karis appears much taller than all the other cheerleaders in Cheer Squad Secrets, she’s listed on imdb as 5’8″.

Karis is also known for her roles on BH 90210 (Kyler Norris), Open Heart (Dylan Blake), and on R.L. Stine’s The Haunting Hour (Amber), among others.