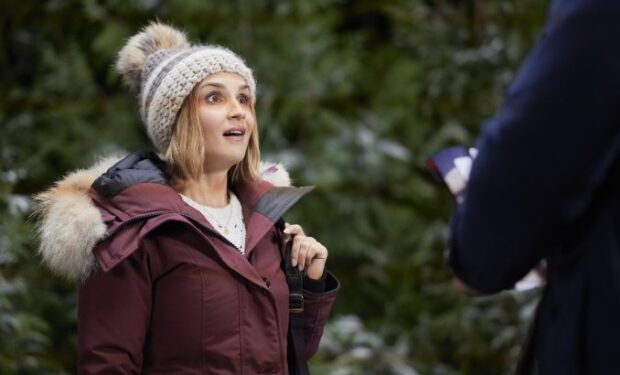 The protagonist of the Hallmark Channel TV movie Cross Country Christmas is Lina Gordon (Rachael Leigh Cook, She’s All That). While headed home for the holidays, she’s surprised to bump into her former high school classmate Max Cooper (Greyston Holt) on the plane ride home. When a snowstorm shuts down the Denver airport, the two work together to find a way home.

Cross Country Christmas was filmed in Mission, British Columbia (population 38,833) in Canada. It’s located on the Fraser River and near mountains and lakes overlooking the Central Fraser Valley, about 50 miles southeast of Vancouver.

The town of Mission is known for its commuter rail, the West Coast Express, which runs five trains every day to and from Vancouver and Mission City Station. The West Coast Railway Heritage Park in Squamish, BC, is home to over 90 pieces of vintage railway equipment and is the second largest railway museum in Canada. It’s also a popular special events and wedding venue!

Fun facts about Mission: Episodes of The X-Files, Riverdale, and Dark Angel have been filmed there and it’s the hometown of pop star Carly Rae Jepsen, winner of Canadian Idol!

Cross Country Christmas premieres on Hallmark Channel on Sunday, December 20 at 8 pm, right before A Veteran’s Christmas at 10 pm.