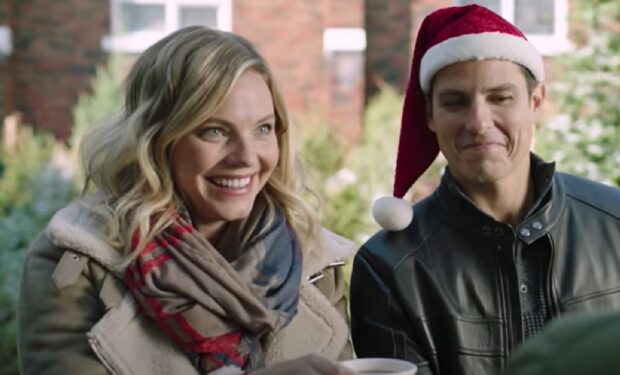 Mumford and Faris in 'A Veteran's Christmas' (Hallmark/Crown Media)

In the Hallmark Channel movie A Veteran’s Christmas, a decorated U.S. Marine who just served a tour in Afghanistan, Captain Grace Garland (Eloise Mumford), returns home. While driving home, her car breaks down on a snowy road in a small town.

Local judge Joe Peterson (Sean Faris, Gabriel on Pretty Little Liars) stops to help and offers Grace his guesthouse until her car is repaired. Sparks fly as the two celebrate Christmas in the quaint town.

A Veteran’s Christmas was filmed in North Bay, Ontario (population 51,553) in Canada. Located approximately 210 miles north of Toronto, North Bay is situated on the Canadian Shield, which provides a rugged landscape. In the film, when Grace and the other soldiers disembark the plane, they are at the Jack Garland Airport or Canadian Forces Base North Bay, home to the 1 Air Force.

A Veteran’s Christmas airs again on Hallmark Channel on Sunday, December 20 at 10 pm.