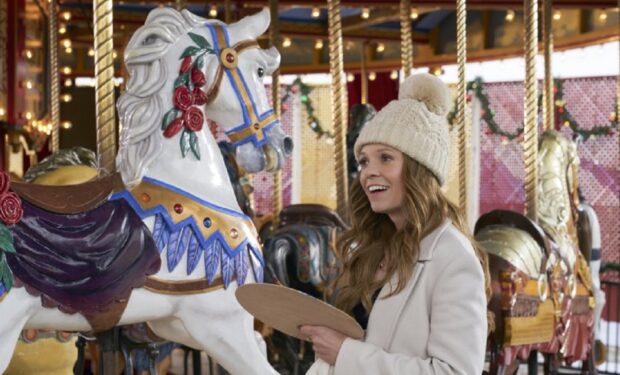 The protagonist of the Hallmark Movie ‘A Christmas Carousel’ is art teacher Lila (Rachel Boston, Witches of East End). When not in the classroom, Lila works with her father – together they restore carousels. When her father gets a call from the Royal Family of Ancadia, the father and daughter pack up their paints and head to the site, to repair the family’s heirloom carousel. There she meets and falls for the roguish handsome celebrity Prince of Ancadia, Whitaker (Neal Bledsoe).

Is the town of Ancadia real? The answer is no. The movie was filmed in Ontario, Canada.

The carousel featured in the film looks just like the classic carousel located at the Heritage Railroad & Carousel, a tourist attraction in North Bay, Ontario. See photos above and below. Note: There are at least three other amusement parks in Ontario with such classic carousels in use.

A Christmas Carousel premieres on Hallmark Channel on Saturday, December 19 at 8 pm.