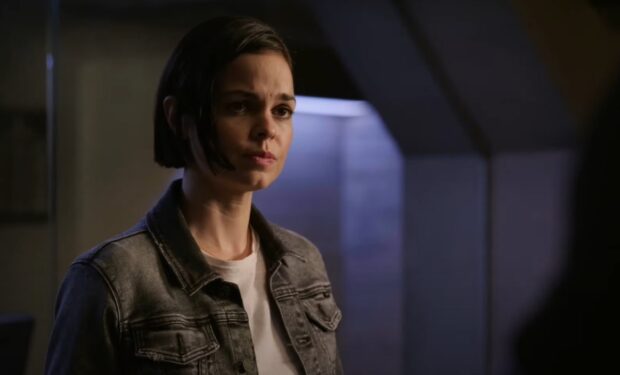 On the S.W.A.T. episode ‘Hopeless Sinner,’ Chris (Lina Esco) recruits Hondo (Shemar Moore) and the rest of the SWAT team to help her save Zoey. The teenage girl has joined a church called the Kingdom of the Blessed led by the charismatic and predatory Bishop Miller (Sean Patrick Thomas), who’s using his church for illicit gain. Zoey isn’t the only girl who has fallen under the Bishop’s spell. “It’s like they’ve all been hypnotized,” says Chris.

Zoey is portrayed by Mika Abdalla.

The 20-year-old actress is known for her roles on Netflix’s Project Mc2 (McKeyla McAlister; see photo above), and in the 2017 movie The Fandango Sisters (Lil’ Jackie), among others.

Mika will appear next on the upcoming drama/thriller series Cruel Summer with Disney star Olivia Holt.

When not on a TV or movie set, Mika enjoys the great outdoors and sometimes in a peek-a-boo string bikini as seen in the gorgeous photo below which she captioned: “Sliced my foot open exactly 16 minutes into my birthday, but all that tells me is that I’m partying right.”

S.W.A.T. airs Wednesdays at 10 pm on CBS, right after SEAL Team at 9 pm and The Amazing Race at 8 pm. [NOTE: Stream S.W.A.T. or any CBS show through Amazon Prime or CBS ALL-ACCESS with free trials.]