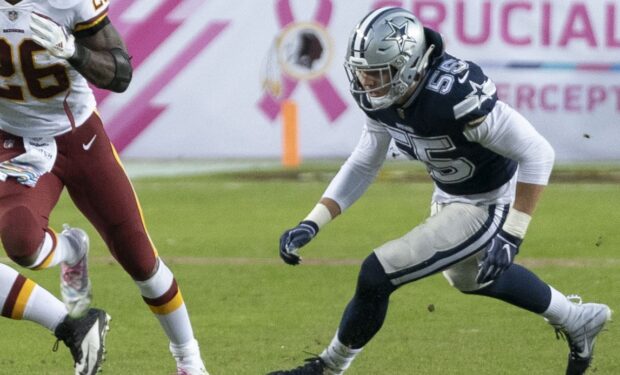 The Dallas Cowboys (3-8) vs Baltimore Ravens (6-5) game is Dallas’s last chance at the NFL playoffs. All eyes will be on quarterback Andy Dalton (Dak Prescott is injured) and linebacker Leighton Vander Esch, who’s had six or more tackles in the four of the past five games.

The 24-year-old linebacker played college football at Boise State University before he was selected in the first round (19th overall) of the 2018 NFL Draft.

After the 6’4”, 256 lbs. athlete signed a $11.84 million four-year contract, he proposed to his gorgeuos high school sweetheart Maddy Tucker.

Leighton and Maddy have come a long way from their hometown of Riggins, Iowa (population 419), where Leighton played high school football and basketball. Maddy played basketball, too: her father was the head coach. “Sports were my livelihood growing up,” she said. “It, in some ways, defined who I was.”

Riggins is also known for its annual rodeo. In September, Maddy Vander Esch competed at the Stockyards Rodeo in Fort Worth, Texas. She came in fifth place! Swipe to see the video below of Maddy in action.

The Cowboys vs Ravens game will broadcast live from M&T Bank Stadium on Tuesday, December 8 at 8 pm on FOX.