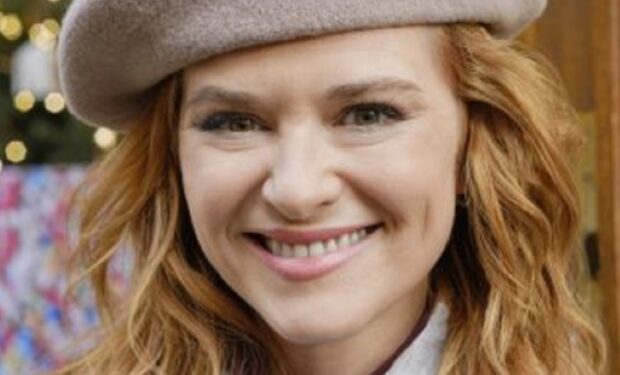 The protagonist of the Hallmark Channel movie Christmas in Vienna is concert violinist Jess (Sarah Drew). The gorgeous young musician has lost her passion for music but finds it again during a trip to Vienna during the holiday season. In the romantic city, she meets handsome American diplomat Mark Olsen (Brennan Elliott) and his children.

Actress Sarah Drew says: “One of the most challenging things I’ve ever done for any role was learn how to ‘play’ the violin” for this movie. She gives credit to the composer and violinist for the soundtrack to Nathalie Bonin, who was her teacher for the musical sequences.

Sarah says Nathalie spent an hour with her every day on FaceTime “and I practiced about three hours a day for the two weeks leading up to those scenes.”

In the audio/video above, Nathalie tells Sarah, who had the job of making herself look like one of the top violinist in the world: “you have to fake it so it’s believable and you really pulled it off.”

Sarah Drew is best known for her roles as Dr. April Kepner on Grey’s Anatomy, Kitty Romano on Mad Men, and Hannah Rogers on Everwood, among others. Fun fact: Sarah launched her acting career in 2000 as a voice artist in the MTV animated series Daria (as Stacy Rowe).

Christmas in Vienna premieres on Hallmark Channel on Saturday, November 14 at 8 pm.