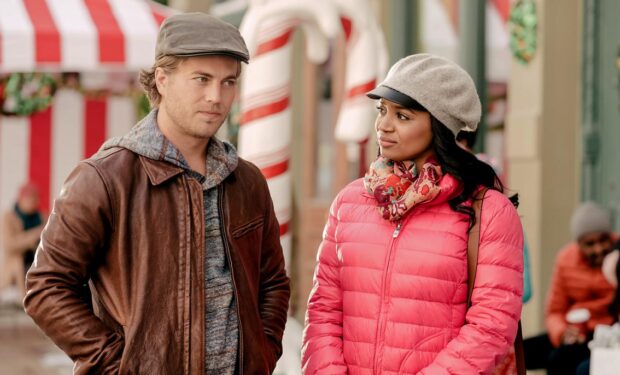 The protagonist in the Lifetime movie No Time Like Christmas is advertising copywriter Emma Potter (Kyla Pratt). Before leaving Los Angeles to return home (Vermont) for the holidays, she finds the engraved watch she gave her college sweetheart, Fletcher Conroy (Edward Ruttle), in an antique store.

Emma’s sister Bronwyn (Rachael McLaren) thinks it’s a sign that the two former lovers should be reunited so Bronwyn arranges to have Emma staying at the same bed and breakfast as Fletcher.

Kyla Pratt is known for her roles on TV series One on One (Breanna Barnes) and as Eddie Murphy’s daughter Maya in the Dr. Dolittle movies, among others.

Get ready to see more of the 34-year-old actress. She’s starring in the new FOX comedy Call Me Kat with Mayim Bialik (The Big Bang Theory, Blossom), which premieres January 3, 2021.

No Time Like Christmas is re-airing on Lifetime on Saturday, November 28 at 10 pm.