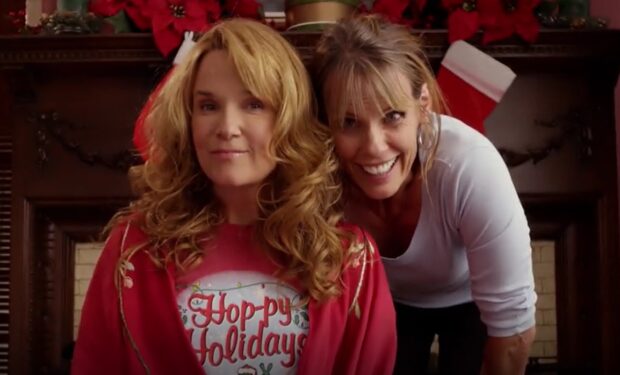 Lea and Alexandra in Love at the Christmas Table (Lifetime)

In the Lifetime movie Love at the Christmas Table, two childhood friends, Sam (Dustin Milligan) and Kat (Danica McKellar), spend every Christmas Eve together. Every year, they and their parents show up at the house of E.B. (Lea Thompson) and have a great time… until adult Sam gets a new job and brings a girlfriend to the annual get-together, upsetting Kat.

Sam’s mother Eve Reed is portrayed by Alexandra Paul. The 5’10” model-turned-actress is best known for her roles on Baywatch (Stephanie Holden) and Melrose Place (Terry O’Brien), and in movies including Stephen King’s Christine (Leigh Cabot), Dragnet (Connie Swail), and Detonator (Sabrina Carver), among others.

Lifetime is re-airing Love at the Christmas Table on Monday, November 30 at 10 pm.