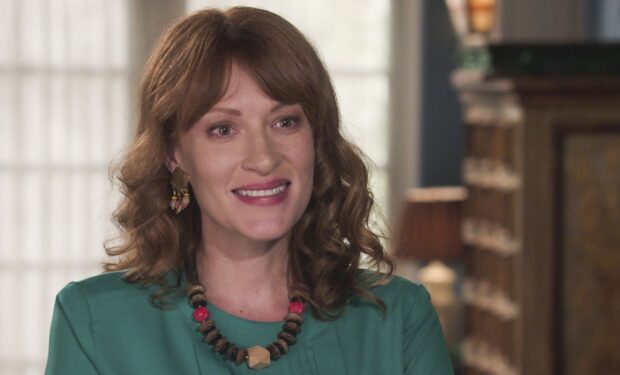 Brea Bee on THE GOLDBERGS (ABC)

In The Goldbergs episode ‘Dee-Vorced,’ while Barry (Troy Gentile) struggles to reunite the JTP after his breakup with Ren, Beverly (Wendi McLendon-Covey) meddles in Adam’s (Sean Giambrone) relationship with his cool new girlfriend Brea (Sadie Stanley). So much so that it leads to a confrontation with Brea’s divorced mother, Vicki, who’s played by actress Brea Bee. Yes, real-life adult Brea Bee is playing Brea Bee’s mother on the show.

In the post above, Brea says she’s playing her mother and confirms that she used to date The Goldbergs creator and showrunner Adam F. Goldberg in high school although they went to different schools.

The red-headed Philadelphia native, actress Brea Bee is known for her roles on the hulu series Light as a Feather (Sylvia Gallagher), Grey’s Anatomy (Patricia Cole), General Hospital (Sharon Grant), and in films including Silver Linings Playbook (Nikki) with Bradley Cooper and Jennifer Lawrence, among others.

The Goldbergs airs Wednesdays at 8 pm on ABC, right before American Housewife at 8:30 pm, The Conners at 9 pm, black-ish at 9:30 pm, and For Life at 10 pm. [BONUS: Stream any ABC show through the ABC GO Digital App found here. Download is FREE.]