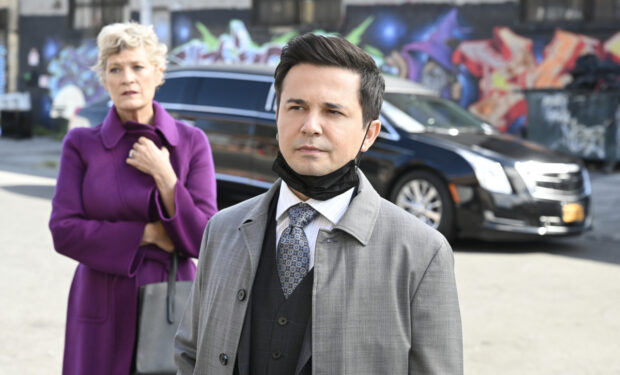 In the Season 5 Bull episode ‘The Great Divide,’ the TAC team experiences a conflict of interest in court when Benny (Freddy Rodriguez) represents the plaintiff and Chunk (Christopher Johnson) represents the defendant in the same civil suit. Benny’s client is Evelyn Waters (Dana Wheeler-Nicholson), a mother who sues young artist Lily Knowles (Sasha Frolova) she deems responsible for her daughter’s death.

Actress Dana Wheeler-Nicholson is known for her TV roles on Friday Night Lights (Angela Collette), Nashville (Beverly O’Connor), Seinfeld (Jerry’s girlfriend Shelly who throws him out of her apartment after he won’t use her toothbrush), and in films including Fast Food Nation (Debi Anderson), Tombstone (Mattie Blaylock Earp), and Fletch with Chevy Chase (Gail Stanwyk, see photo below), among others.

Bull airs Mondays at 10 pm on CBS, right after All Rise at 9 pm.