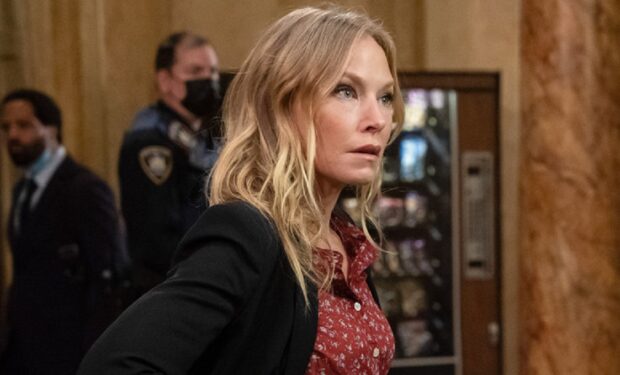 In the Law & Order: Special Victims Unit Season 22 episode ‘Ballad of Dwight and Irena,’ while Fin (Ice-T) puts on a suit and gives his deposition in the lawsuit against him, NYPD officers Rollins (Kelli Giddish) and Kat (Jamie Gray Hyder) respond to a dangerous domestic violence call. The “bad guy” character in the episode, Dwight Wagner, is portrayed by Christopher Cassarino.

Cassarino is known for his roles on New Amsterdam (Dr. Ed Nottingham, see clip above), Mercy Street (John Wilkes Booth), and in the new Disney+, National Geographic series The Right Stuff based on Tom Wolfe’s book of the same title (and the 1983 movie). See set photo below.

Cassarino plays hotelier, philanthropist and Holocaust survivor, Henri Landwirth. In 1954, Landwirth was the manager of Cocoa Beach’s first motel, the Starlite Motel – aka the “original astronaut hotel” — near Cape Canaveral.