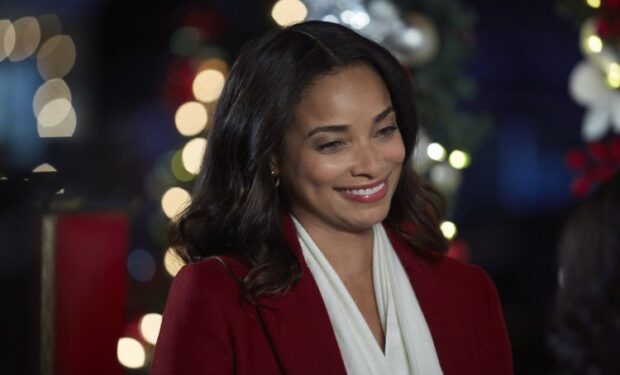 Rochelle in 'A Christmas Tree Grows in Colorado' (Hallmark/Crown Media)

The new holiday Hallmark Channel movie A Christmas Tree Grows in Colorado is about a gorgeous single woman named Erin (Rochelle Aytes, S.W.A.T.) who is diligently working on her small town’s Christmas celebration. She lives in the (fictional) town of Brooklyn, Colorado. (The title of the movie is twist on the classic coming-of-age novel, A Tree Grows in Brooklyn.)

In order to get the perfect spruce tree for the big tree lighting event, Erin must woo a handsome firefighter named Kevin (Mark Taylor). Sparks fly.

A Christmas Tree Grows in Colorado was filmed in three different locations but none in the U.S. The whole film was shot in British Columbia, Canada including the little town of Hope, population 6,181. The picturesque town is located at the easternmost point of British Columbia’s lower mainland area. One of Hope’s largest employers is Nestlé Waters: its bottling plant employs about 75 people.

The town of Hope is a population to shoot movies. The first Rambo movie First Blood starring Sylvester Stallone was filmed almost entirely in and around Hope — so was Shoot to Kill staring Sidney Poitier and Tom Berenger.

A Christmas Tree Grows in Colorado premieres on Hallmark Channel on Tuesday, November 24 at 8 pm.