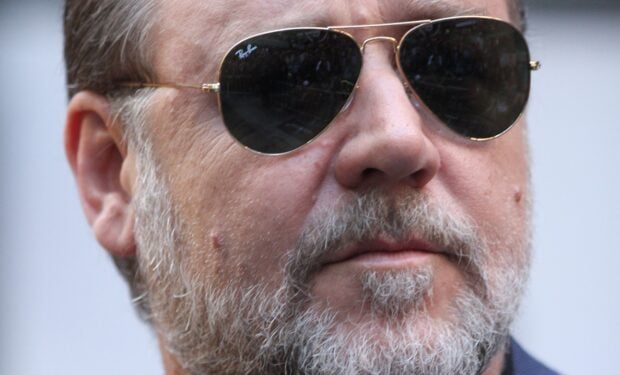 Academy Award winning actor Russell Crowe (A Beautiful Mind) is promoting his latest film Unhinged in which he plays an unstable man who has a confrontation at an intersection with a woman driving a station wagon. She becomes the target of his rage. See creepy trailer below.

In videos promoting Unhinged like the one below, Crowe wears a black hoodie embossed with the words The Georgetown Project. That’s the title of his next creepy film.

Is this the announcement you’ve been waiting for ? GLADIATOR 2

In The Georgetown Project, Russell stars as Anthony Miller, a troubled actor who “begins to unravel while shooting a horror film.” Based on the photo below, he plays a priest! Anthony’s estranged daughter (Samantha Mathis) “wonders if he’s slipping back into past addictions or it’s there’s something more sinister at play.”

Russell Crowe shared the first pics from the new film set: “The actor converts… #thegeorgetownproject Will you confess your sins ?” ▪ ▪ ▪ ▪ #RussellCrowe #РасселКроу

The Georgetown Project is written and directed by M.A. Fortin and Joshua John Miller, writers of the 2015 film The Final Girls and co-creators of Queen of the South. It’s scheduled to hit theaters in 2021.