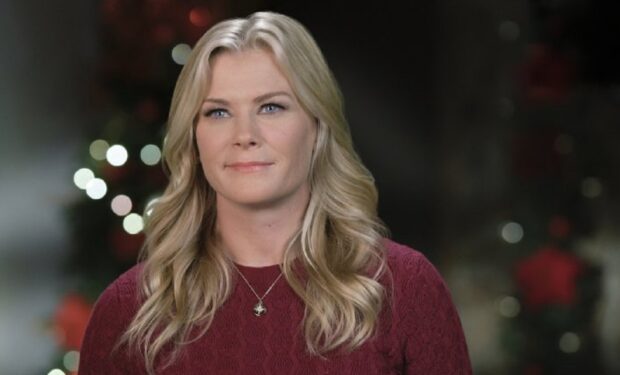 In the new Hallmark Channel movie Good Morning Christmas!, when two TV hosts in New York City, Melissa (Alison Sweeney, Murdered, She Baked) and Brian (Marc Blucas) are assigned to the festive small town of Mistletoe for a week before the holidays, they both push back. But not hard enough. While in Mistltoe, pretending to get along for the sake of appearance, they eventually discover that there’s more to each other than they thought.

Ali Sweeney is best known for her Daytime Emmy Award winning role as Sami Brady on the daytime soap opera Days of Our Lives and as former host of the reality show The Biggest Loser. But at home she’s known as mom!

Ali poses in the photo above with her two kids (son Ben and daughter Megan) and says together they make dog food from scratch for their three puppies. While Ali says it was a “fun family project” she also admits, “I love to cook, but that was a huge undertaking. Yikes. But the doggos love it.”

They like to cook food for themselves, too! Check out Ali, Ben and Megan making a favorite family dish (Mexican Lasagna) in the video above.