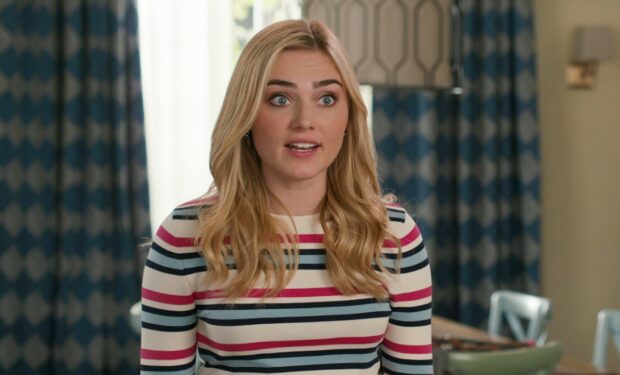 When not filming American Housewife, the 20-year-old actress Meg Donnelly hangs out with her Z-O-M-B-I-E-S 2 co-star Noah Zulfikar (Jacey) who describes himself on Instagram as an actor, dancer and artist. Meg says the denim “pantaloons” she’s wearing in the photo series above are by Noah. Swipe to see a close-up of that green lacy bra and Dickies railroad cropped work shirt.

As actress Brady Reiter replied: “It’s a fit!” She captioned the angled shot above: “stomp.”

happy birthday my baby. thankful for you everyday. i love you always poopie ♾🤍🦋

American Housewife airs Wednesdays at 8:30 pm, right after The Goldbergs at 8 pm and right before The Conners at 9 pm and black-ish at 9:30 pm.