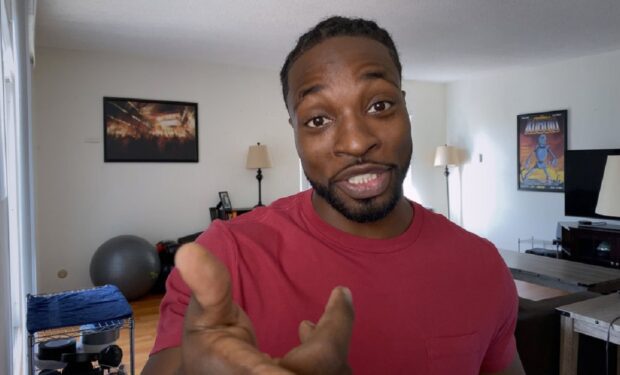 Preacher Lawson as Ben on CONNECTING... (Photo by: NBC)

On the new NBC sitcom Connecting…, seven friends try to stay connected during a global pandemic via videotelephony (aka Zoom). If you watched the Crackle series StartUp with Ron Perlman, you’ll recognize the gorgeous pink-haired young actress Otmara Marrero who plays Annie. She’s in love with Ben, who if you watch America’s Got Talent, you’ll recognize as stand-up comedian Preacher Lawson.

Preacher was a finalist on Season 12 in 2017 (singing ventriloquist Darci Lynne won). He also went far on America’s Got Talent: The Champions in 2019.

Preacher isn’t letting the pandemic turn his body to mush as you’ll see on the show (he’s often shirtless) and in photos like the ones below. P.S. He’s vegan and works out every day!

Spongebob is the GOAT, and my abs only look like this before breakfast! And if you want your abs to look like this, try this product called ”Workout every day and no more random ice cream at 2 am in the morning” click the link in bio for more details! #Spongebob #TheGoat #LosAngeles #ItsHot #AsAMotherFather #PlantStrong #Vegan

Connecting… airs Thursdays at 8:30 pm on NBC, right after Superstore at 8 pm and right before Dateline at 9 pm.