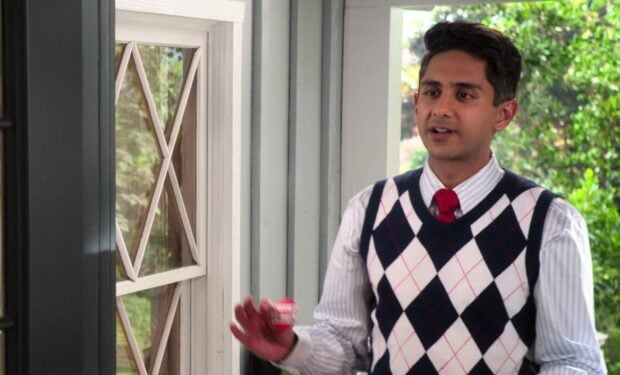 Adhir Kalyan on THE GOLDBERGS (ABC)

On The Goldbergs episode ‘It’s All About Comptrol,’ while Geoff (Sam Lerner) and Erica (Hayley Orrantia) come to a point in the relationship where they realize they are in different places in college, Beverly (Wendi McLendon-Covey) tries to find a new purpose in her life as she seeks political office as the city comptroller. Wearing her finest stars and stripes outfit, Bev goes head to head with her political opponent, Dodd Wembley.

Dodd Wembley is portrayed by Adhir Kalyan. The South African native is best known for his roles on Arrested Development (Adhir) and Rules of Engagement (Timmy Patel) with David Spade who plays Timmy’s obnoxious boss.

Get ready to see more of Adhir: he’s currently filming the new Michael Maren film Shriver with Michael Shannon who plays a handyman in New York City who’s mistaken for a famous and famously reclusive writer and sent to a university to deliver a keynote address.

The Goldbergs airs Wednesdays at 8 pm on ABC, right before American Housewife at 8:30 pm, The Conners at 9 pm and black-ish at 9:30 pm.