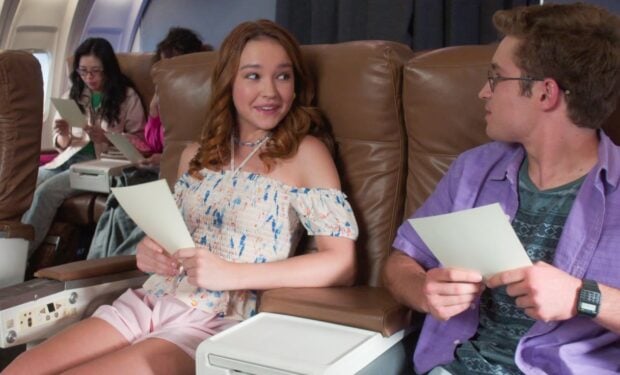 ABC is celebrating the return of The Goldbergs with two new back-to-back episodes. On the Season 8 premiere ‘The Prettiest Boy in School,’ Adam (Sean Giambrone) deals with being a cool kid at William Penn Academy but with the same friends.

On the second episode ‘Airplane!’, Beverly (Wendi McLendon-Covey) surprises the family with an end-of-summer vacation to Miami. And Adam’s girlfriend, the most popular girl at school Brea Bee aka Queen Bee, gets to go too! And it looks like they’re traveling first class!

Brea is portrayed by Sadie Stanley. The 18-year-old actress/singer is best known for her role as Kim in the 2019 Disney live-action TV movie Kim Possible — and with her Goldbergs boyfriend Sean Giambrone as Ron Stoppable!

Watch Sadie (as Kim) sing the song “Call Me, Beep Me!” from the Kim Possible movie.