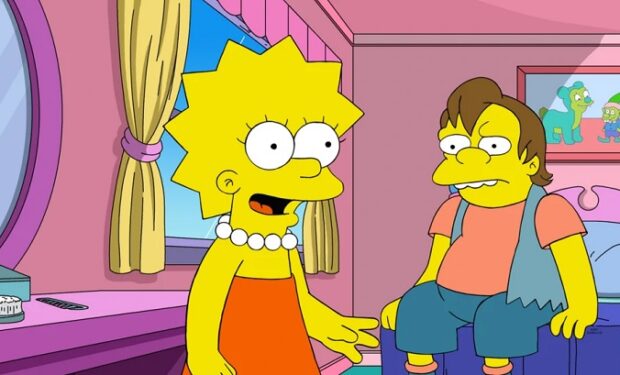 On the Season 32 episode of The Simpsons, ‘Treehouse of Horror XXXI,’ the annual terror-themed trilogy includes a frightening look at the 2020 election, parodies Spider-Man: Into the Spider-Verse and Lisa celebrates her ninth birthday over and over again. Julia Prescott wrote the episode: it’s her first for The Simpsons.

Here’s a fun lil pandemic bit of positivity: ever since the lockdown happened, my friend (and former teacher!) @jeremyguskin has been exploiting the teaching software given to him by my old HS to conduct an “Appreciation of The Simpsons Seasons 1-9” class. Every Sunday, we get together and laugh and forget about Outside Stuff for at least an hour. It started with a gaggle, it slowly whittled down to a core 4 gang. We’re the pin pals. And we have special masks now. ❤️💕 (thanks to professor Alex for arranging!!)

In July, Julia shared a photo of the special Simpsons face mask (above) she received in the mail.

She says her friend (and former teacher!) Jeremy Guskin (modeling the mask below) has been teaching a class called “Appreciation of The Simpsons Season 1-9,” and every Sunday they get together with two other Simpsons aficionados. Together they call themselves the “pin pals” (just like Homer and his bowling team which consists of Ott, Moe and Anu), hence the masks.